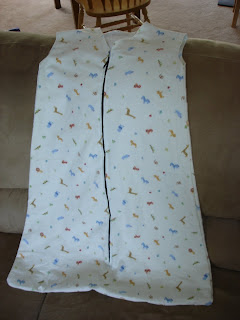 so....i have multiple recieving blankets sitting around the house...and being the frugal woman than I am, I decided to make a sleep sack for my daughter, Aria. I used a smaller sleep sack and traced around the edges, and got very imprecise pieces, but perfection was not what I was aiming for, first attempt was for a functional, if not pretty sleep sack. Aria, being a little furnace, a single layer was all that was used. The fleece makes her too hot so I was looking for a lightweight alternative. 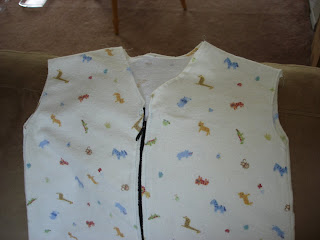 First time installing a zipper...actually I just discovered I have a zipper foot for my machine. Please don't look too closely : o ) 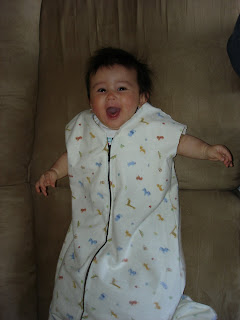 So a couple of weeks ago, Andy and I found this dresser on the side of the road being given away for free...well the dutch in me cannot forgo free things...so we put it in the back of our car. Being that we were going to move within the next week, the most logical place for it to reside was still the back of our car! There it stayed until this past weekend when we moved into our new place!
Now, structurally this dresser was pretty good, but it had a some dings and some wood missing...nothing I couldn't fix. The same day we found the dresser I found a sander at a garage sale for $20 with sandpaper, and some wood putty for a dollar. 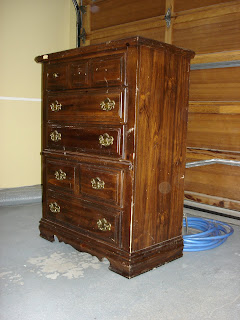 It's a pretty standard dresser...nothing too special, but I thought it would be a great place for me to store fabric, and being that my fabric would be contained...well Andy couldn't argue too much:) 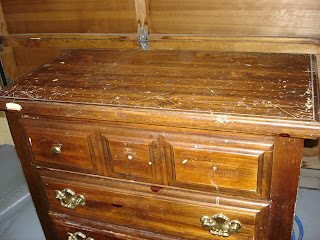 It definitely had some scratches that needed to be sanded out...unfortunately not all did...but hey it adds character!
Yesterday I decided that I was going to get the dresser done...Andy claimed it would become kindling if I didn't get it done it a timely manner so yesterday was a great day for it!
This is how it turned out. I really like the color--which was paint that I got for free at another garage sale--SCORE!-- and the handles actually look okay. I may spray paint them white, but for now they are fine. Also the missing handles are in the car it resided in, and it's at work with Andy, so will be added later.The top is still a little rough, so I may get some paper to cover it...but for now it's functional and I like the way it looks overall 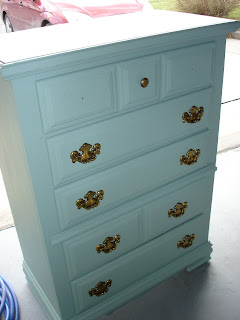 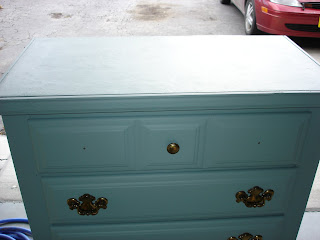 Email ThisBlogThis!Share to TwitterShare to FacebookShare to Pinterest
Labels: Frugal

I am finally almost finished one of my many projects that are scattered around the house. My husband adores all of my half finished projects and my many bargains, especially the ones residing in "HIS"garage! :) 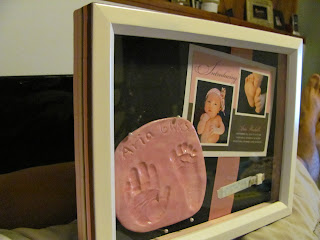 Here is the shadowbox I bought to display a plaque with my daughter's hand and footprints.  I'm pretty happy with how it turned out so far, just need to add a verse to the upper left side and it's ready to be hung in her room.  Originally it was a blah gold/brown so I spray painted it ivory, hot glued ribbon to the outside and inner edges and added a black background instead of the non-inspiring tan it came with. Sorry about the poor quality photo, I had some issues avoiding a glare so this was the best I got.

My goal this summer is to complete at least all the projects in the garage before my husband decides to pitch them out in frustration :).
Posted by Sew Dutch at 11:27 PM No comments:

One of the advantages of living in Alaska is that we can go out for an afternoon with our husbands and child, and hike to the top of a mountain...and get great views like this: 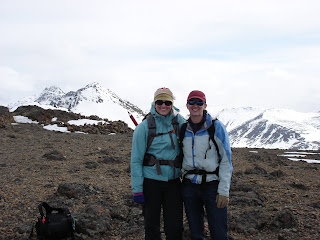 One of the disadvatages of living in Alaska is that we start our seedlings in May....May 4 to be exact:) Also, there are only certain things that can be grown without a greenhouse. So being that this is our first full summer in AK (Sarah only...Nathania has been here for years), my husband and I decided we would start a garden on our kitchen table! We've planted spinach, lettuce, chives, basil, sugar snap peas and some perrenials to go in the garden of our new house. So far the lettuce has exploded! It's only been 5 days and it's already pretty big. We're super excited to see if they all work out. 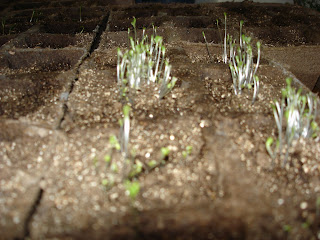 The lettuce on day 5 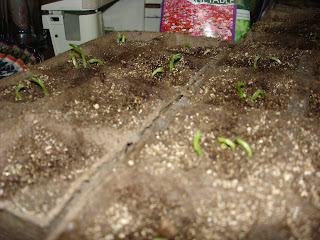 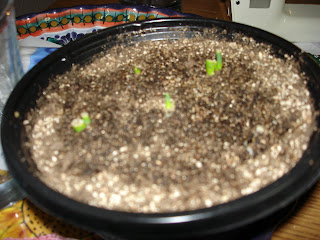 This is our experiment. I was reading on the web that you can plant the ends of your green onions (the part with the roots still attached) and they will grow more green onions! How frugal and cool is that?! It seems to be working so far...the onions have sent up new shoots, so we'll see what they do.
As for this random post...well I know it's not about sewing or crafts, but I was so excited about the little seedlings we have that I wanted to share it!
Posted by Sew Dutch at 11:24 PM No comments: 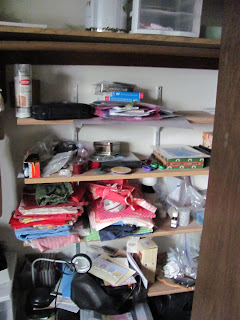 We decided that we needed a better way to stash our sweaters that we use to make our mittens that we are going to sell at some craft shows, and Nathania had a space in her craft closet that needed a little reorganizing so we moved the stuff from the before picture and........
...this is what we came out with. 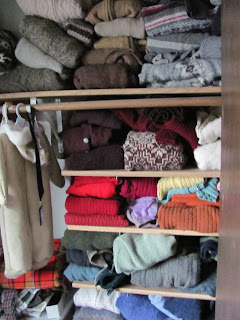 It's so much more organized than the boxes we had them in and now we are able to see what we have and put together different color combinations without digging and digging through boxes! We have received alot of these sweaters from a co-worker of mine...she originally donated some sweaters she already had, but wasn't able to wear and then got us a whole bunch more! Often I come into work and there is another bag of sweaters on my desk:) She's so sweet! We have just about every color imaginable and can make any combo of mitten...so if there is anyone who is interested in some mittens let us know;)
Posted by Sew Dutch at 8:22 PM No comments:

Sew Dutch
We're Nathania and Sarah, sisters who love to be crafty and love a good deal! We like to reuse or recycle items to create our crafts and like the challange of making things "new"