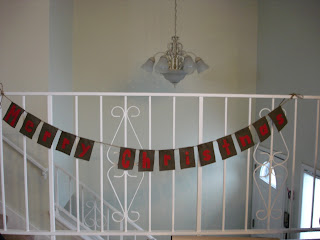 So..at the previous craft fairs we've done, everyone comments on our "Sew Dutch" sign. We even had someone aske for a "Welcome" sign (which is in the works!) I do love a good bunting, so I decided to try to make a "Merry Christmas" sign. We got some old wool pants and shirts that we weren't sure what to do with and making them into signage was the perfect solution.
On the previous "Sew Dutch" sign I had just pinned the letters into place, but it took F.O.R.E.V.E.R. So after perusing many other blogs about appliqueing letters, I went out and got some fusible webbing. Can I just say I just found my new love...it's soooooooooooo cool. It cuts the work time in half and you can actually put the letters where you want them without pins and sliding. As I've mentioned before...pinning and I aren't the closest of friends.
I wanted to fancy up the letters a little bit so I did some random stiching around each letter. Each letter has something different...are they all embroidery stiches? Nope...I just made them up as I went. 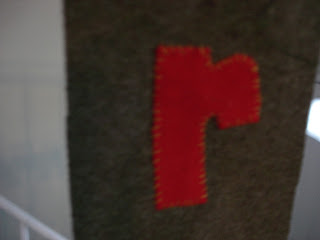 Can I just say, taking pictures of a 14 letter sign is not the easiest? I'm trying to improve the camera skills...which will be exponentially improved with our new camera. The current one is ancient! 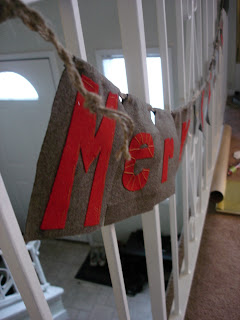 We're hopefully gonna have this sign and at least one more at the craft show on Saturday!
Happy Sewing!
Sarah
Posted by Sew Dutch at 12:01 AM

Sew Dutch
We're Nathania and Sarah, sisters who love to be crafty and love a good deal! We like to reuse or recycle items to create our crafts and like the challange of making things "new"